It has been reported in the Bismarck/Mandan area that America’s Best Contractor has been misrepresenting themselves while canvassing. If you have been contacted by this company, please take action.

Remember: If the DUCK is not on the truck…. it might mean BAD LUCK. 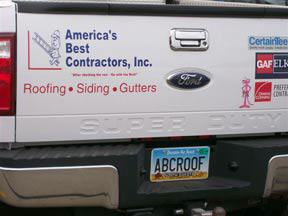 We have received many reports from citizens in the Bismarck/Mandan area that have signed contracts with a company that falsely represented itself as ABC Roofing. These homeowners pre-paid for roofing or siding work to repair hail damage incurred during the early summer storm season.

Don’t be fooled by these contractors that are leveraging the ABC Seamless reputation for excellence in exterior remodeling to talk you into some roofing repair, we do not endorse their services or products.

If you feel that you have been misled by America’s Best Contractor, E-Mail Paul Barnum.